Prayers Requested for the Imminent Departure of Cyavana Swami 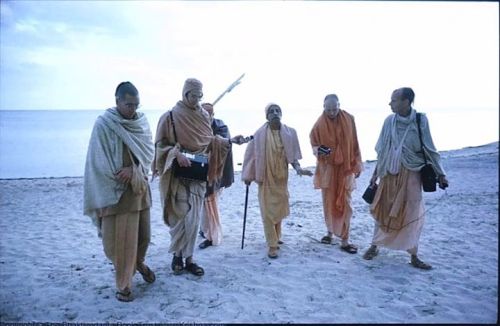 Prayers are required for the imminent departure of Cyavana Swami, a pioneer disciple of Srila Prabhupada, presently in coma.

Cyavana Swami was born in Cincinnati Ohio in 1945. At the age of eighteen, he enlisted in the United States Coast Guard and was stationed aboard a Cutter based at Boston Harbor. That’s where he first encountered his Spiritual Master A.C Bhaktivedanta Swami when he arrived in America in 1965 aboard the Indian steamship freighter, the Jaladuta.

“I stood frozen in time as his ship passed, I lowered the flag and when I raised it up again I was looking straight at him, and he was looking directly at me. He raised his left hand, palm outward as if to acknowledge the greeting.”

Six years later he took formal initiation and the following year was given invitation to the Sanyassa Ashram as a Tridandi Goswami in the  Gaudiya Vaishnava Sampradaya. At the ceremony Srila Prabhupada told him that more important than taking sannyasa is having the desire to take sannyasa, “You are not ready now but someday you will be.”

His spiritual quest led him to Africa, India, Europe, South America, and other parts of the world. He is a strong proponent of his Spiritual Master’s unique position in the disciplic succession, and the traditional values he taught. —— Here is the story he wrote in 2017 in his own words when he first saw  Srila Prabhupada come in the Boston Harbor on the Jaladuta…..

Cyavana Swami: “I was stationed aboard a Coast Guard Cutter at Boston Harbor, and on September 17th 1965, when Srila Prabhupada’s Jaladutta was moved from the anchorage over to Constitution Wharf my ship was docked at the base nearby, I was on duty on the Quarterdeck. It is a Maritime custom that when two ships pass they offer a “salute” by lowering, then raising again the Ensign or Flag at the stern of the ship. I offered the American Flag to Srila Prabhupada’s Jaladutta in this tradition, and when I looked up I was looking directly at him and he was looking directly at me. I was transfixed by his effulgence, and stood frozen in time as his ship passed. He acknowledged the greeting by slightly raising his left hand, palm outward.“ I will never forget that moment. Now 52 years later the wake of his ship will continue to flood the world with love for Krishna.

“Yes, at the time I had no idea who he was other than a Holy Man from India. Constitution Wharf is located at the mouth of the Mystic River and the Coast Guard Base is only a few hundred yards across from it. Six years later I was initiated, also in Boston. Jai Srila Prabhupada! The night before the ceremony, Prabhupada called me up to his room, he asked me to read two verses from Bhagavad Gita, he commented briefly then ordered me to go to Africa to open centers and preach to the people there. I have always hoped that my greeting with the flag made him feel happy and welcome after his long and arduous journey across the Atlantic.”